St. Mark was a native of the North African county of Libya. He was born in the city of Cyrene in Pentapolis, The western part of Libya, west of the border of Egypt. St. Mark was born of Jewish parents three years after the birth of our Lord and Saviour, Jesus Christ. His original name was John and his surname was Mark : ” And when he {Peter}came to himself ….., he {Peter} came to the house of Mary the mother of John, whose surname was Mark, where many gathered together praying” (acts 12:11-12); and ” Barnabas determined to take with them John, whose surname was Mark” (acts 15:37); “And Barnabas and Saul returned from Jerusalem, when they had fulfilled their ministry, and took with them John, whose surname was Mark” (acts 12:25). St. Mark’s parents, Aristopolos his father and Mary his mother, migrated to Palestine shortly after the birth of St. Mark because of the Berber attacks on their town and property. They settled in Cana of Galilee not far form Jerusalem A few years later St. Mark’s father died and Peter Simon { St. Peter}, who was married to a relative of St. Mark’s father took care of St. Mark and considered him a son: “The Church that is in Babylon, elected together with you, salutes you and so does Marcus {Mark} my son”; (1 Peter 5:13). Peter Simon saw to it that St. Mark got a good education. St. Mark studied law and the classics. Church Traditions state that Mary, St. Mark’s mother, was admirer of Jesus Christ and followed Him everywhere and that St. Mark was one of the attendants who served at the feast in Cana of Galilee at which Jesus Christ turned the waster into wine: “And the third day there was a marriage in Cana of Galilee … and both Jesus and was called and his disciples, to the marriage .. when the ruler of the feast had tasted the water that was made wine, … This was the first miracle Jesus did …” (John 2:1-11)

St. Mark was one of the 70 chosen by our Lord to be His very own Apostle. The Lord also chose St. Mark’s house as the one where they ate the Passover before His crucifixion. In his house the very first Eucharist was held and so St. Marks house is actually considered to be the very first Church! It was in St. Mark’s house also where the Holy Spirit descended on the Apostles on the Day of Pentecost.

One day when St. Mark and His Father were walking together near the Jordan River, close by the desert, a lion and lioness appeared suddenly before St. Mark and his father. St. Mark’s father, wanting to save St. Marks life, told St. Mark to flee to save himself. Our great saint told his father not to be afraid but to trust in our Lord Jesus who would save them. St. Mark prayed and immediately the two lions fell dead. St. Mark’s father was so amazed at this that he asked his son to tell him all about our Lord Jesus Christ. St. Marks’s father believed and St. Mark himself baptised him!

Then in 42 AD, the Holy Spirit guided the Patron of our Church, the great St. Mark to preach in Egypt!

On the day of his arrival into Egypt, he walked from street to street discovering Egypt. St. Mark walked about all day and evening until the strap of one of his sandals was torn. St. Mark walked into the shop of the first shoe maker he saw; Ananias. St. Mark asked Ananias to mend his sandal. As Ananias was repairing St. Mark’s sandal, his finger was pierced by the awl (the needle) and he cried out ‘O, One God!’ or ‘Eis Theos’ in Greek. Our great St. Mark, took this as a perfect opportunity to begin preaching and he told Ananias the Cobbler all about this ‘One God’, our Lord and Saviour Jesus Christ. Ananias’ heart was opened and he invited St. Mark to his home to stay with him. Ananias and his whole family were baptised, and they were the first fruits of the Coptic Church of the See of St. Mark. (Ananias was the first Bishop of our church ordained by St. Mark himself.)

In 62 AD, St. Mark left Egypt to visit all the believers he had preached to along the way, before coming to Egypt. Before leaving Egypt he ordained Ananias as the first bishop of the Coptic Orthodox Church. St. Mark also founded a Church in Crypt (a place in Egypt) where the Holy Family had taken refuge. In doing this, St. Mark helped to fulfil the prophecy of the Prophet Isaiah when he said;

He was martyred in Alexandria in 68AD.

Why St. Mark is the Parton Saint of St. Mark’s College?

Today, the Coptic Orthodox Church is the largest Christian Church in the Middle East, with about 12 million faithful followers in Egypt. There are many monks and nuns in monasteries and convents in Egypt and an increasing number of well-educated young men and women who dedicate their lives to God as priests, monks, nuns, deacons and deaconesses.

Outside Egypt, there are over 100 churches in the United States and Canada, as well as two theological colleges and a monastery in California. There are over twenty churches in Australia as well as two monasteries, two Theological Colleges, a Convent and five Coptic Schools. There are three Coptic Schools in Sydney of which St. Mark’s College is the oldest and largest with classes from K to 12. There is also a new monastery in France.

All of this growth is due to the great love and support of our Lord Jesus Christ and the love, dedication and strength of the Patron Saint of our Church and School, Saint Mark. The College chose to be named after Saint Mark, in order to benefit from his power and service, dedication, devotion and love, to learn from his qualities and indeed pray that just as he was guided to create and build the Coptic Orthodox Church, so too he would help to support and guide St. Mark’s College to be a rock and light in our world today.

The ‘Bull’ as a Symbol of Saint Mark:

The ‘bull’ is used to represent St. Mark, which conveys the message of SERVICE and STRENGTH in the life of St. Mark. 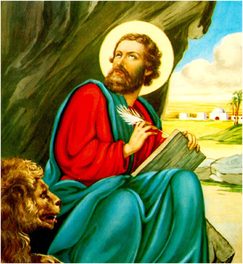 May the prayers of the Great Saint Mark be with us always; with the School, faculty, students and all the servants and structure that make up the College.

And glory be to God forever.
Amen.